Sheila365 has been rather quiet lately, as I’ve had many irons in the fire.   But I’m making up for it with this long post.  For the past week and half, I’ve been enjoying our latest sailing trip to the British Virgin Islands.  Before that, I was busy just getting ready to leave.

This year, Colleen and Lee joined Monte and I on a 40′ Beneteau called Forever Young.  Also on the trip were Kurt, Ken, Kevin and Greg on the guys’ boat, Ada, a 43′ Beneteau.  This is our fourth trip to the BVI, each time coming back to charter from ProValor Charters, well-run by Jim Gulczynski & Cecilia Donegan.

We all flew to San Juan, Puerto Rico and met up.  The next morning we headed to Tortola and the boat fun began.

Our boat, Forever Young, is on the right in this shot, and the guys’ boat, Ada, is on the left.  This shot is from Little Harbour on Jost Van Dyke.

I brought my new big-girl camera, equipped with polarizing filters for the lenses.  I was excited to try it out.   It seems to have worked, the blues and greens in some of these shots are nearly as amazing as the real thing.   I took way too many pictures to upload here, but here are a mess of my favorite shots.

The BVI Spring Regatta was underway the first few days we were there.  We had front row seats. 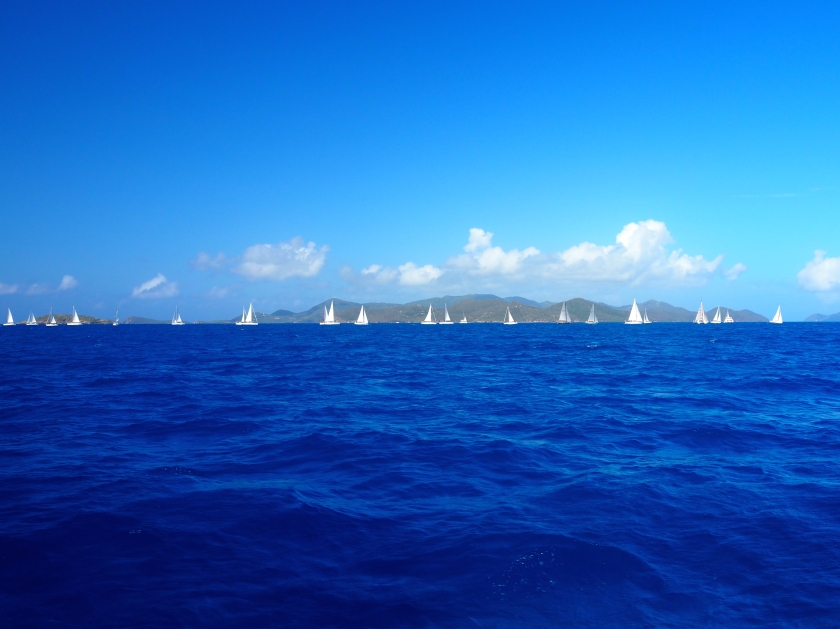 One of the races literally sailed through the mooring ball field at The Indians just off our stern.  We we had stopped there to snorkel for the afternoon. 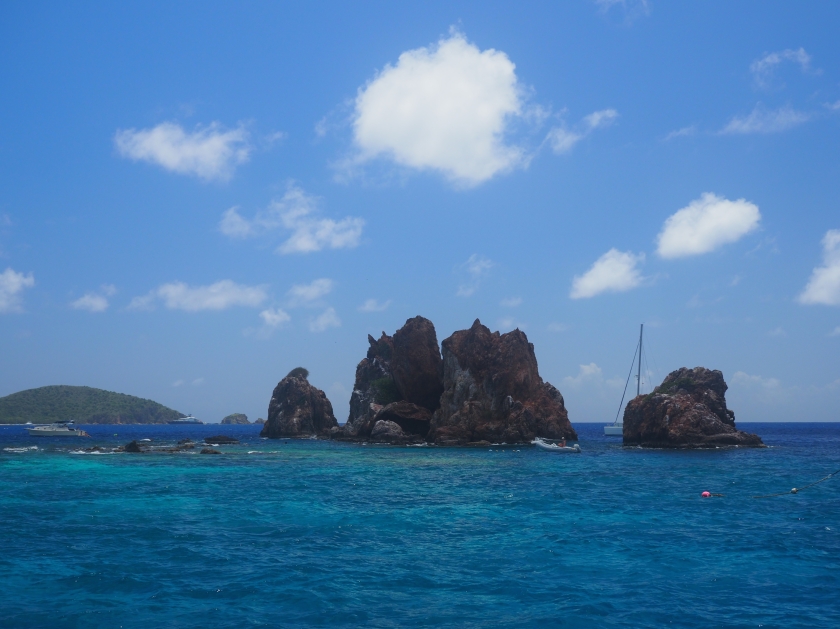 We sailed to Jost: 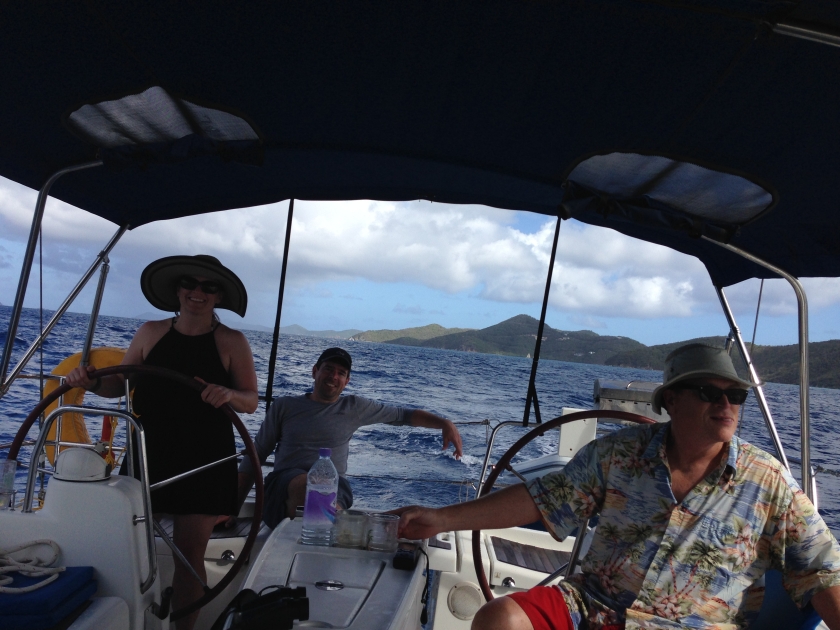 We caught a ball for the night in Little Harbour.  This is a shot looking towards Tortola.  Lobster at Abe’s for dinner!

We sailed into White Bay, and snorkeled the reef.  While we were doing that, a 40′ cat hit the reef just a few feet away from us, leaving bits of its hull floating to shore (!)

After some painkillers at Soggy Dollar bar, we headed to Great Harbour for the night. 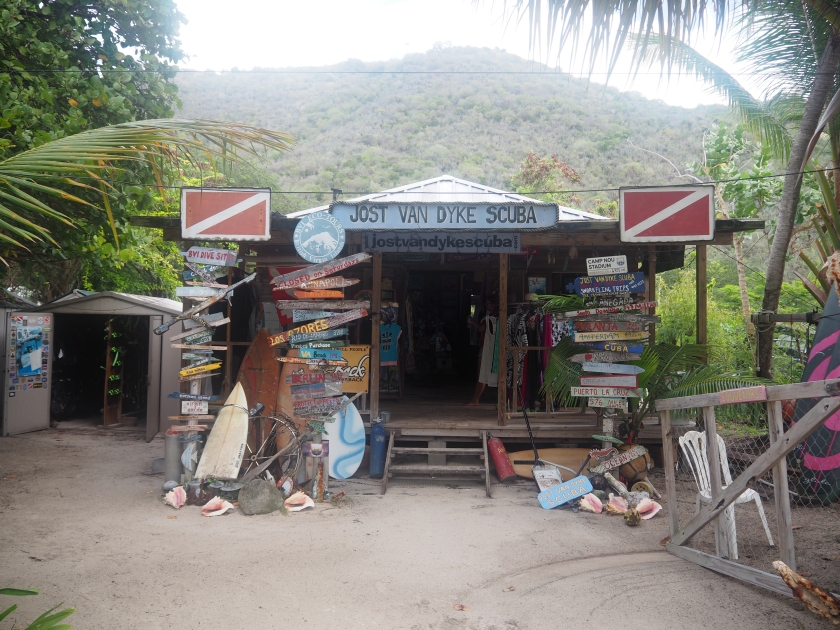 We sailed to Peter Island to a bay that we had anchored in overnight 2 trips ago.  The weather permitted us to do it again this trip.   We had the place to ourselves.

This is a shot looking east from Key Bay, Key Cay to the right, more of Peter Island in the background.

Glorious sunsets.  St John USVI in the background of this shot: 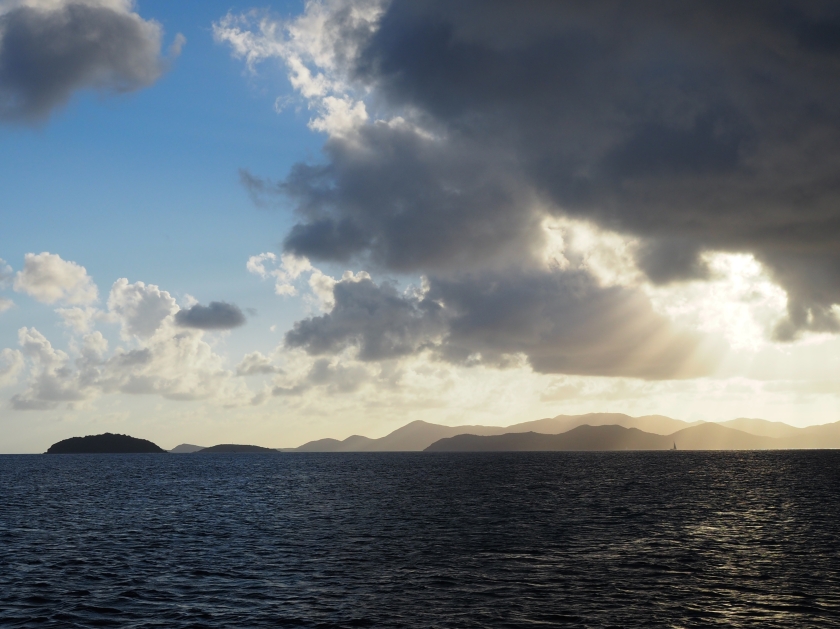 I saw the Southern Cross constellation overnight.  It was due south from us, just above Norman Island – I didn’t get a photo, but my SkyGuide app image will give you an idea of what I saw: 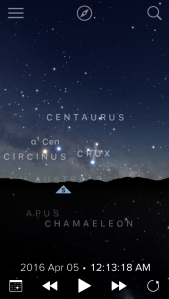 We enjoyed a long sail up to the North Sound of Virgin Gorda, and caught a ball in Leverick Bay.  Our refrigerator had died on us, so we had to toss some of our provisions.   But the repair guy was quickly on the boat and had us back in business in very short order.

We went ashore to Kurt’s friend’s villa overlooking Leverick Bay for dinner.  The food and the views were divine.

A shot on the way to Virgin Gorda:

On a mooring ball in Leverick Bay, looking out through the Mosquito cut at a clipper sailing by: 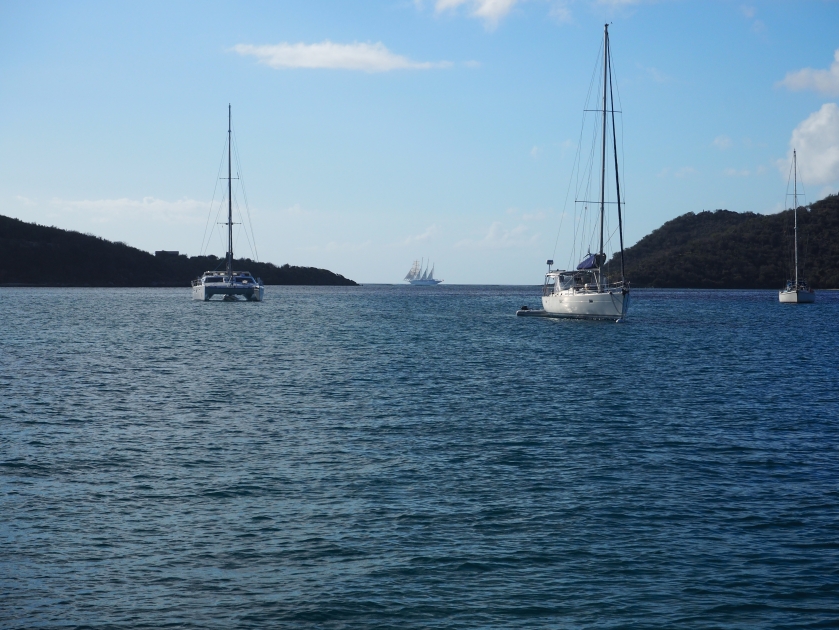 Views from the villa: 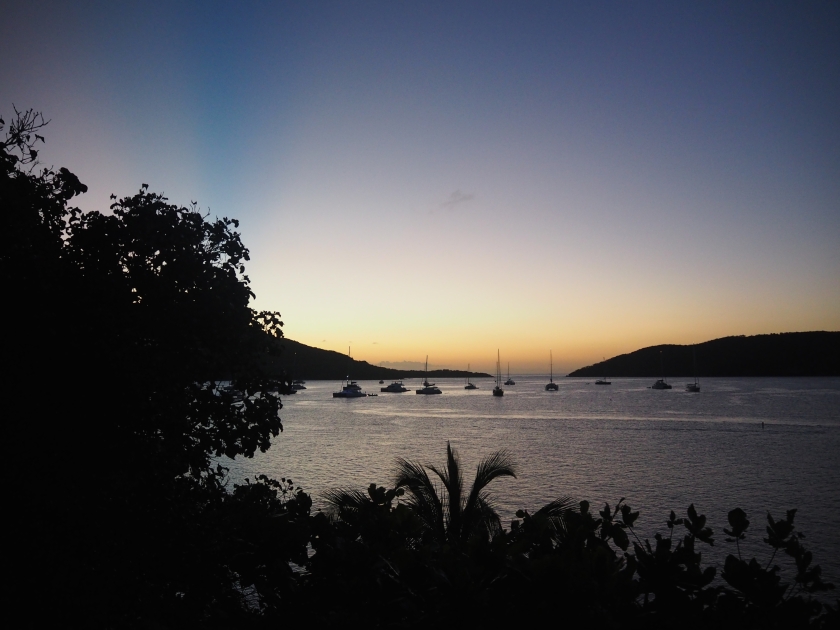 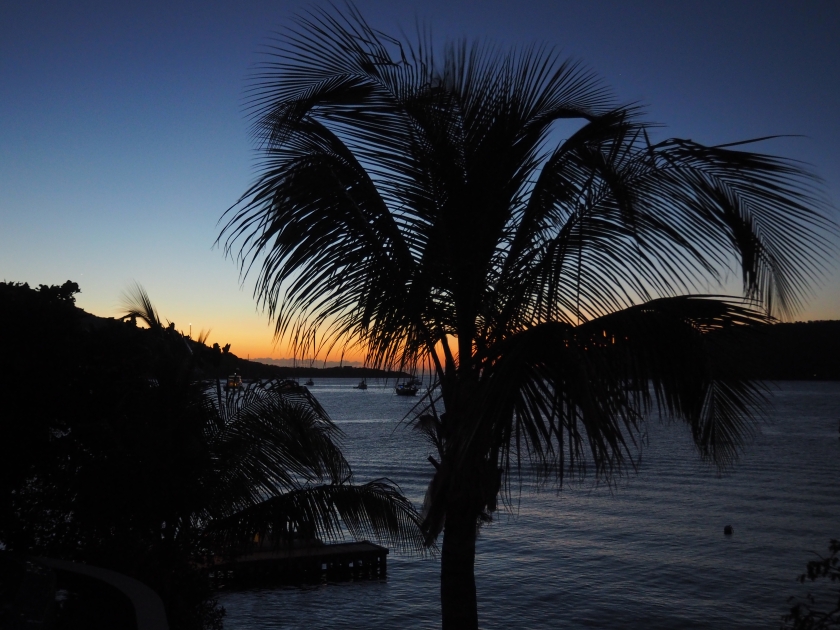 Heading out of North Sound, Ada is right behind us; Leverick Bay is in the background: 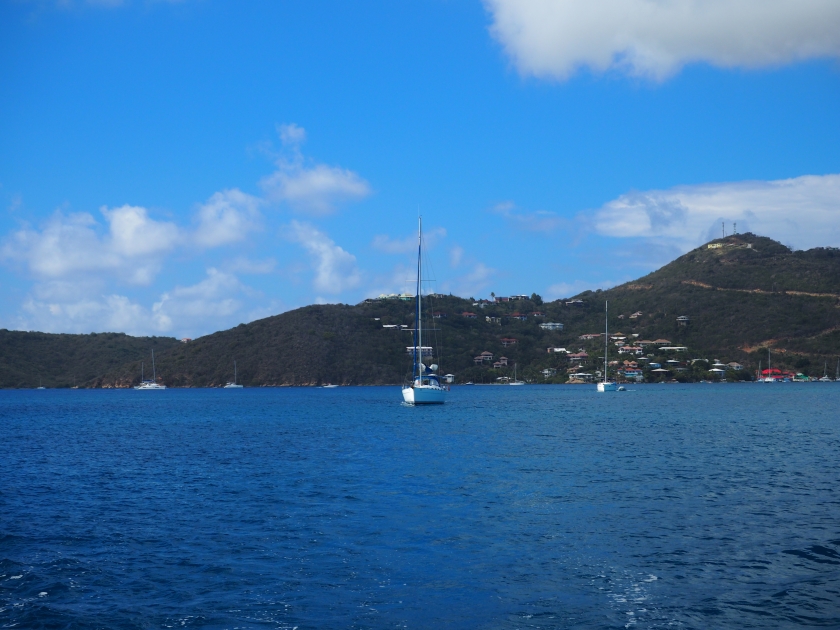 Rain in the distance outside North Sound: 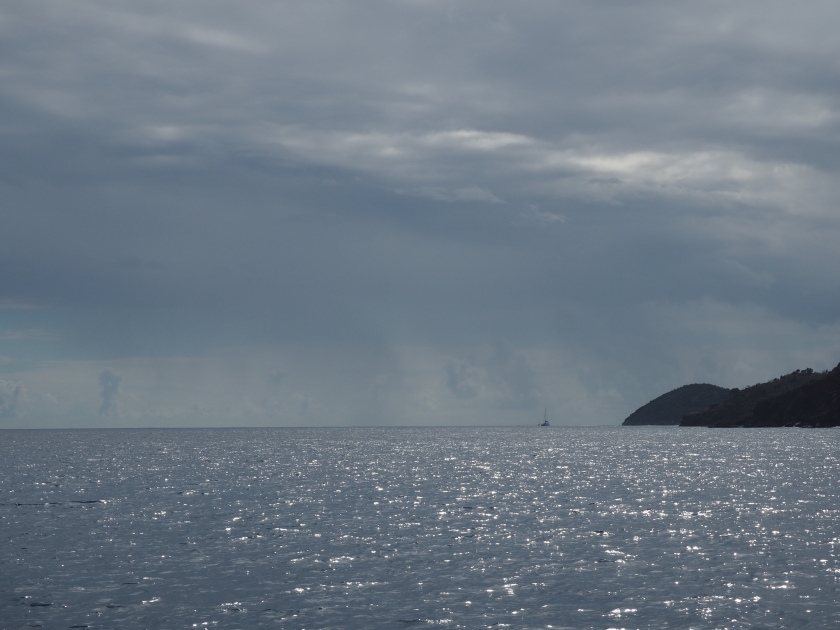 We got a ball at The Baths and dinghied ashore.  It was as beautiful as ever, but we encountered just way too many people inside along the trail (with tour guides)  – more than I have ever seen before.

Then we motored on over to Cooper for the night.  Ada had kindly saved us a ball.  We went snorkeling at Cistern point: 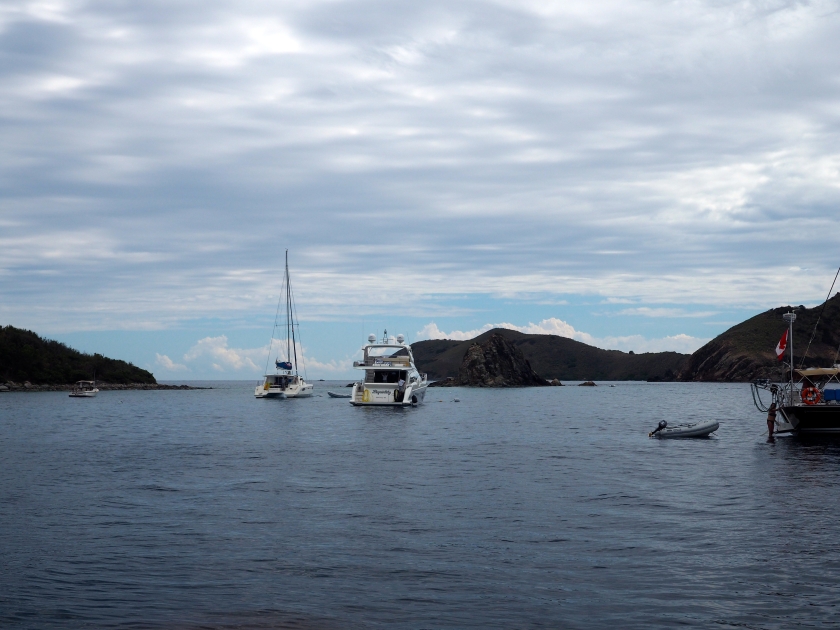 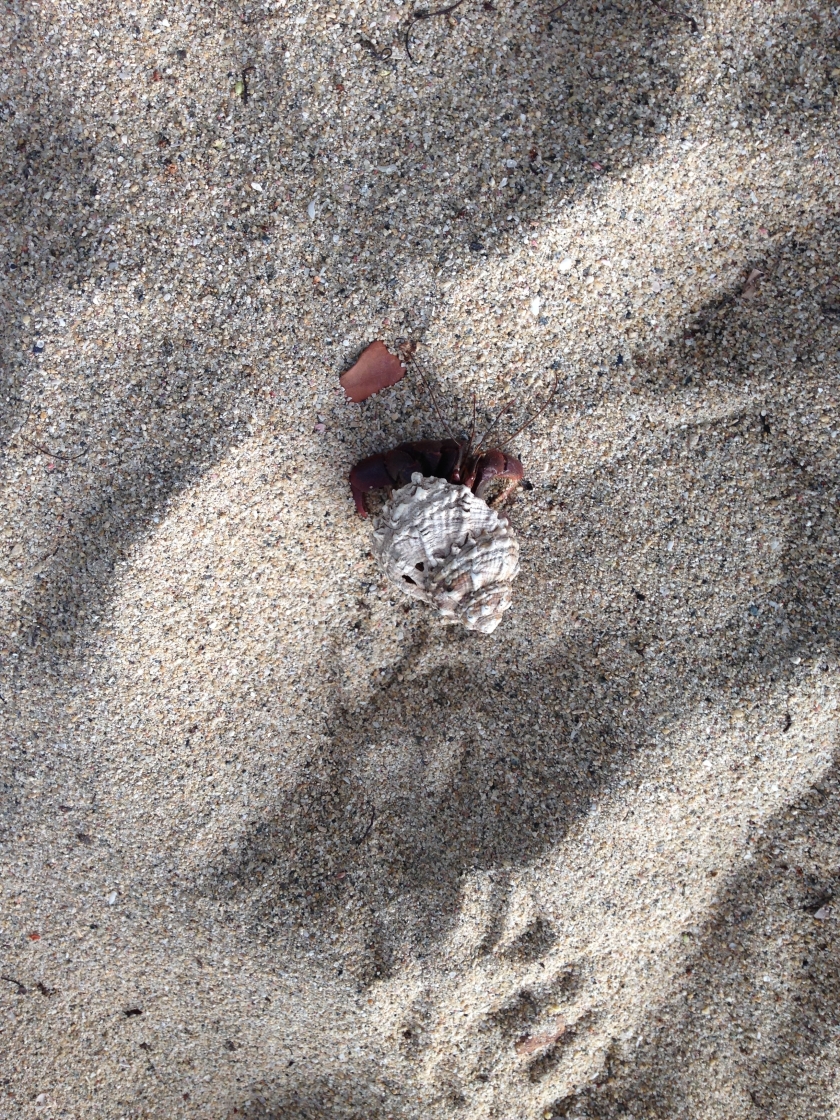 And, the unbeatable sunset views looking out over Tortola: 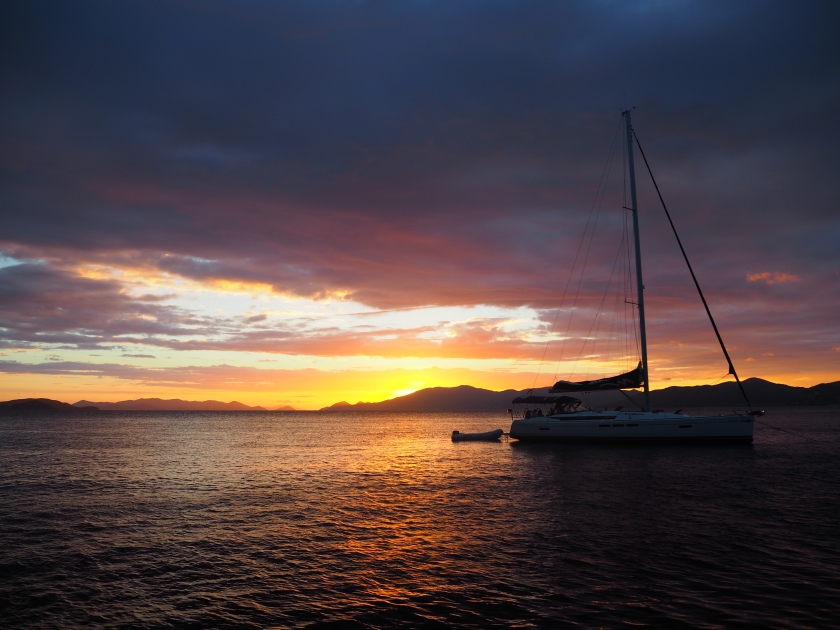 We sailed on the outside of Norman to The Caves for a snorkel, then caught a ball in The Bight on Norman Island for the night.  Dinner ashore at the Pirate’s Bight.

Somewhere in the Atlantic: 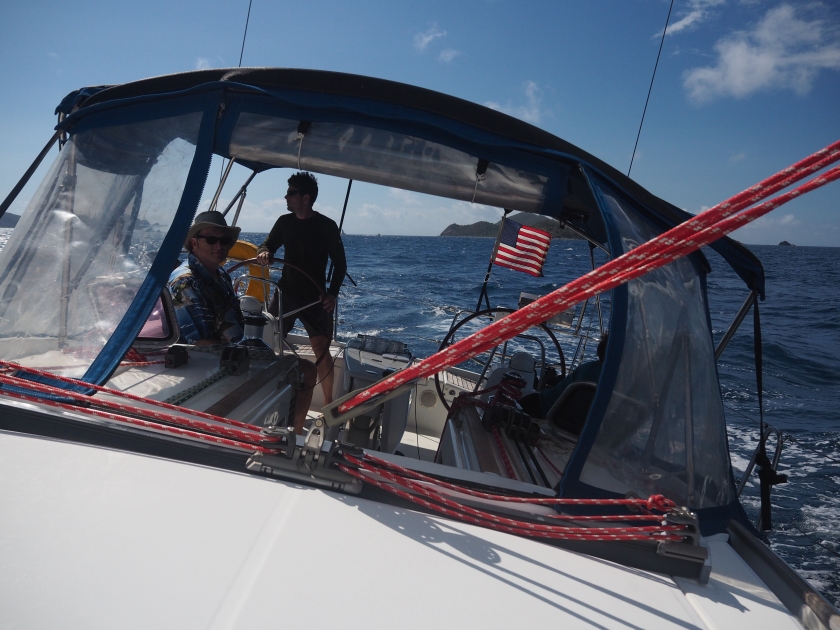 The Indians and Pelican Island from the Bight:

In the Bight for the night, Treasure point to the right:

We sailed to Sandy Cay for lunch and a trip ashore.   We anchored first, and then saw that they now have mooring balls – they didn’t the last time we were here. 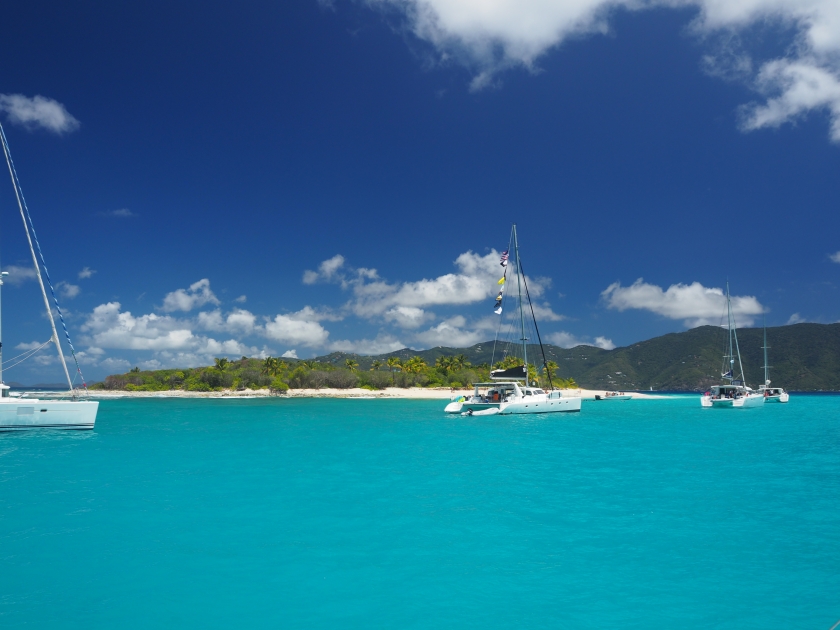 Then we got the next to last ball in front of Foxy’s Taboo at Diamond Cay.  Little Jost was just to our port: 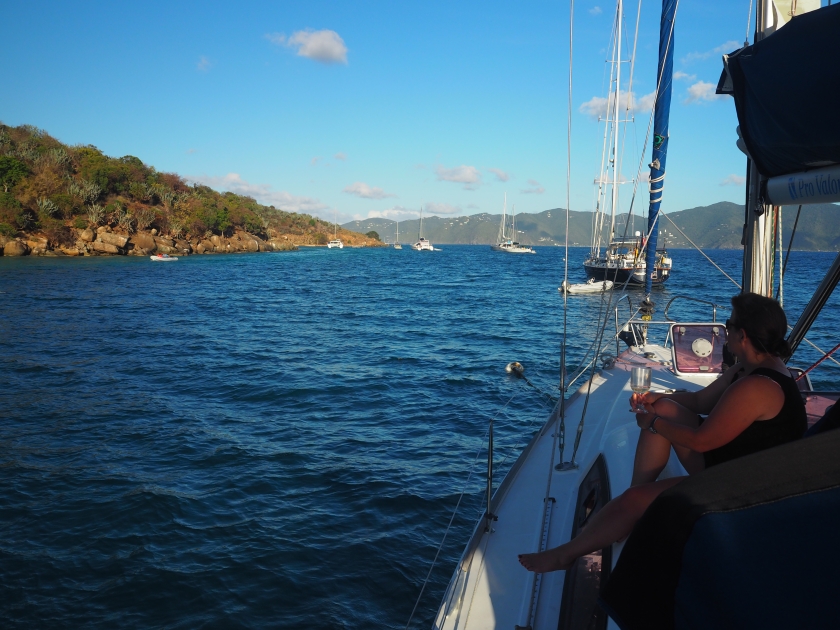 I caught a rare not-blurry-shot from the boat of the sliver moon and Mercury below it to the right, just barely visible over the hill of Jost:

The next morning we walked ashore to the Bubbly Pool.

Mangroves in the bay:

Waves breaking on the rocks:

Above the Bubbly Pool:

And the Bubbly Pool in action:

We decided to head east to complete a circumnavigation of Tortola for this trip.  We stopped at Monkey Point on Guana Island, and then headed back to the marina for the night. 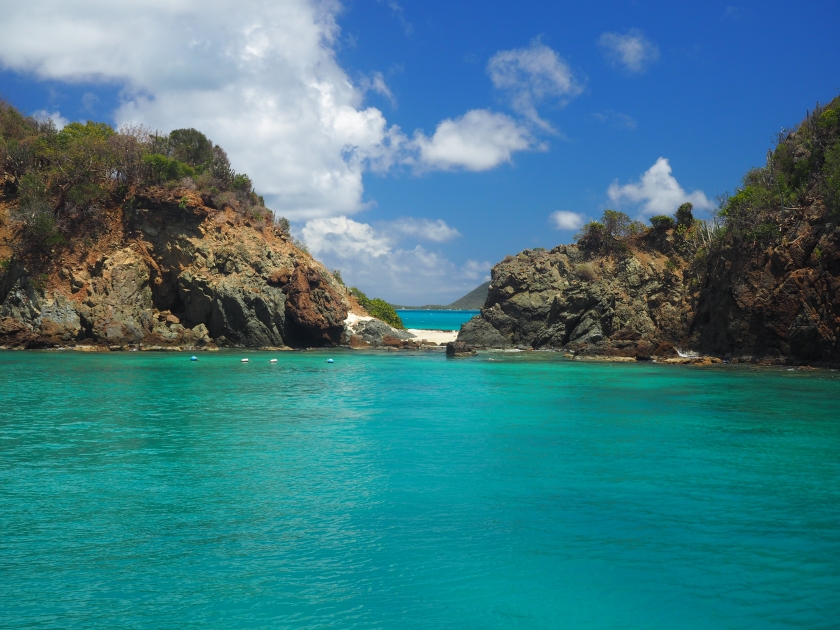 One last look over at Cooper, on our way into Fat Hog’s Bay:

Looking to the east at Virgin Gorda with the Dogs in the foreground:

Now I’m back home with great memories, lots of pictures, and these treasures: