Well, mostly the river taketh away.

It’s a risk we deal with, spending so much time playing on the water.  And, it so happens that this past weekend I lost yet another pair of prescription sunglasses.   I was helping put up a friend’s wind scoop on the bow and the wind whipped things up and the next thing I knew they were sinking below the surface of the lake.  I summarily jumped in to try to grab them, but to no avail.

I lost a different pair of prescription Raybans on the San Marcos rapids a few years ago.  Monte lost a pair of prescription glasses there, too.  A friend lost their wedding band on the same rapids.  I’ve lost three favorite hats, a towel, and know of at least one bathing suit top and diamond earring sitting at the bottom of the lake.   And, amazingly, we lost our entire flag and flagpole that was flying off our transom – on the Fourth of July, no less!  It happens so frequently that we keep a Lost Sh#t Log on the boat.

But every once in a while, the river gives back.  About 10 years ago, I lost a pair of prescription eyeglasses in the lake.  One minute they were sitting on the cabin-top while I tightened my pony tail.  The next minute they were gone.   Over the following few years the lake alternately rose and dropped.   Until, about 3 years after I lost them, the lake was finally low enough that the place where we anchored the day I lost my glasses was high and dry.  So one Saturday morning, I announced that I was going back to that part of the cove to look for my glasses.   And I did.   I combed that dry cove for an hour or two.   I found a snorkel, swim goggles, a swim fin, numerous pieces of fishing tackle, several pairs of sun glasses, a hat, an anchor, lots of trash, AND my lost-for-three-years eyeglasses!

They were sun-bleached and cruddy and one ear piece had broken off.  But there they were!  I can’t bring myself to throw them away.  So they sit in a drawer until I take them out for a chuckle every once in a while. 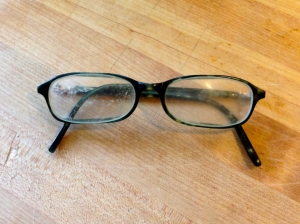