Recently, Apple has been running a commercial with someone singing in the background as the camera flashes clips of people using a Mac.  I immediately recognized it as a song I first heard over 10 years ago when it was featured as KUT Song of the Day. The Austin radio station has since changed to KUTX but their Song of the Day feature is still a terrific place to hear new music.

The song is Story of an Artist, by Daniel Johnston.  Daniel is a visual artist, songwriter, and musician who moved to Austin in the 1980s.  He’s had a lifelong struggle with mental illness, but has found success and is fondly regarded here.  He is the artist who, in 1992, painted the frog, Jeremiah the Innocent, in the iconic Hi, How are You mural in Austin on 21st street at Guadalupe. 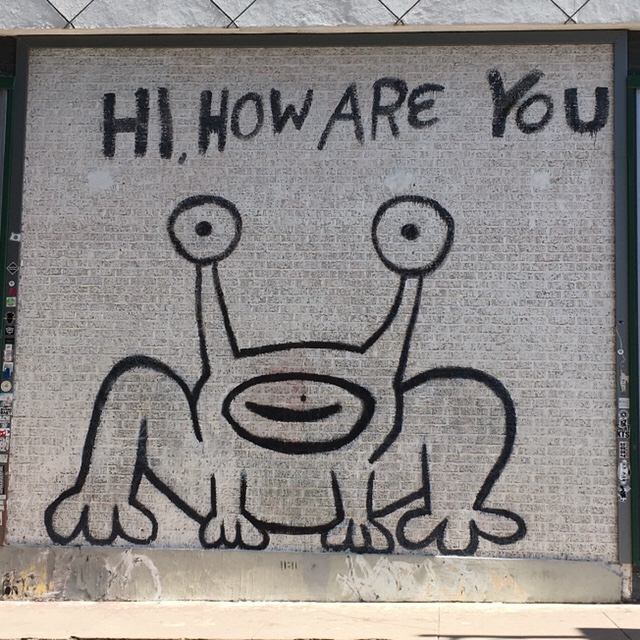 The version of the song I heard on KUT was a recorded-live-in-studio-1A cover of Daniel’s song, performed by M Ward in September 2006.  I liked it the first time I heard it.  But it is a sad song, in my opinion, of an artist shunned by society for being different.  And after having learned more about Daniel Johnston, I think it is autobiographical.  A 2005 documentary about him called The Devil and Daniel Johnston reveals more about the man and his struggles.

The version of the song in the Apple commercial is performed by Johnston himself, originally recorded in 1982; just him, a cassette recorder, and a piano.  In the commercial, the lyrics are chopped up and rearranged, so it comes off as a funky upbeat tune; you don’t get the whole vibe of the original song.  Here’s a link to his entire original recording, if you want to give it a listen.

I think the M Ward version I first heard on KUT Song of the Day is beautiful….but when I heard it, I didn’t know the background story of the artist.  Now I do.

Get out there and listen to some music!

One thought on “Story of an Artist.”