My seat for my flight home on Saturday was on the side of the plane that usually faces away from Mt. Rainier.   So, I was happy to hear the pilot announce that we would be taking off to the west and flying around the city, due to the fact that Seafair was underway and the airshow that accompanies it over Lake Washington.  It turned out that I was treated to the most beautiful views on the way up after all.  Thanks, Mom.  🙂 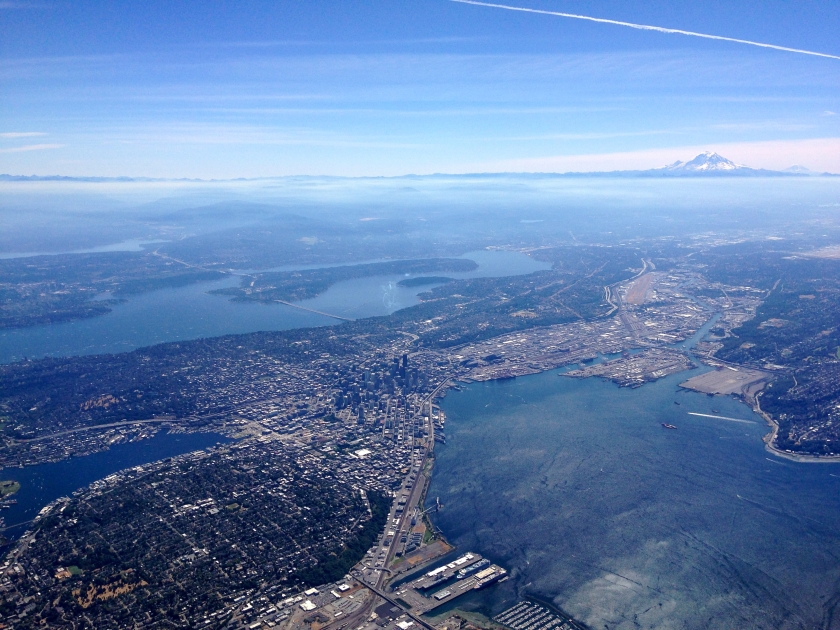 This shot is taken looking to the south east.  Queen Anne Hill is the treed hill to the lower left.  Lake Union is above it.  Downtown is in the center of the picture.  Elliott Bay is to the lower right.   Above downtown is the south end of Lake Washington, and the wispy loops of smoke to the right of the I-90 floating bridge are from planes in the airshow flying over the hydroplane race course.  And, of course, Mt Rainier watching over it all – Mount Adams poking out to its right.  If you look closely you can find the Space Needle, Seattle Center, CenturyLink Stadium and Safeco Field, Boeing Field, Elliott Bay Marina, among other landmarks.

I love this town.